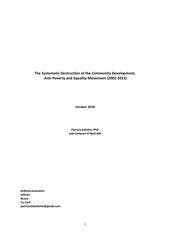 Between 2002 and 2015 the community development and anti-poverty sector was deliberately dismantled by the state. During that period local resource centres and projects funded under the Community Development Programme virtually disappeared, funding to the remaining groups and projects was cut by 35% and supporting infrastructure such as the Combat Poverty Agency, the Committee on Racism & Interculturalism and Pobal were abolished or reduced, leaving the most marginalised communities bereft of resources or supports.

How and why this happened is set down in a recent paper called ‘The Systematic Destruction of the Community Development, Anti-Poverty and Equality Movement’. Written by Patricia Kelleher and Cathleen O’Neill the paper locates these happenings with a wider societal shift away from a widened democratic participation towards a neoliberal regime determined to separate the individual from the context that creates their poverty.

This is a paper that explains matters that have confounded and distressed local communities and those who work with the most marginalised for over a decade. By providing a clear understanding of the past it sets down a foundation for future change.